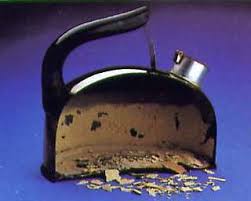 A few months ago I moved from Chicago to Israel and my skin went insane.  I had breakouts galore and overall my skin went from looking nice to a complete disaster.  Now try going to esthetician job interviews when your skin actually looks like it needs the help of an esthetician.  Not pretty.  (Luckily I found bosses who understood what was going on with my skin and overlooked it, hiring me anyhow).  I’ve written about the issue of your skin going psycho in the past so I had a pretty good idea of what was causing my skin woes.  I also met other people who had moved around the same time I had and were experiencing similar skincare issues.  So I realized that what was going on wasn’t completely personal.  In my case I blamed the following issues for my skin issues: change in the climate I was living in, different food, stress, and hard water.  In order to treat my skin, specifically my breakouts, I started using my strongest skincare products (Retin-A and salicylic acid serum from Epionce) more often than I had before.  As with many skincare problems my skin started to calm down around the three month mark of being in my new home.  Of course I still have breakouts occasionally but nothing like when I first moved.  I’ve also recently adjusted my skincare routine because of the winter.

What happened got me thinking about how hard water affects our skin so I decided to investigate and share what I learned with my readers.*

eHow explains how hard water hurts your skin in the online article The Effects of Hard Water on Skin:

Hard water is comprised of high concentrations of undissolved minerals, such as calcium carbonate and dolomite. Although hard water contains these elements, it is not detrimental to your health, but it is harsh on your skin.  …

Self magazine investigates the issue even further in the article Is Your Water Causing You to Break Out?:

The problem with hard water is that its high mineral content prevents it from properly reacting with soap and, instead of triggering a lather, it creates a soapy layer on the skin. This not only clogs pores, but also irritates the skin, making it itchy, flaky and dry.

There’s also a correlation between hard water and skin disorders, like eczema. “The minerals, such as calcium, that are found in higher concentration may cause loss of moisture in the skin, which can lead to irritating conditions, such as eczema,” says New York dermatologist Dr. Eric Schweiger. Research at the University of Nottingham found that, out of over 7,500 school-age children, eczema was significantly more common for those living in hard water areas than those living in soft water areas.

It’s not just a matter of converting hard water to soft, which can be achieved with an at-home filtration system, because this does not take care of the heavy metals–like iron, zinc, magnesium, copper and lead–that cause skin issues. “An at-home filtration system is not an effective means of safeguarding the skin because the heavy metals are microscopic and present in the actual solution of the water,” says Dr. Gross.

So what are these heavy metals actually doing to our skin?

According to Dr. Gross, the impurities cause a chemical reaction with the skin’s natural oils, changing the consistency of the oil from a liquid to a wax, which in turn, clogs the pores and leads to acne. They have the same response to creams, even those that are non-comedogenic.

Also, the impurities found in tap water can act as free radicals, which bond with healthy skin cells and then destroy them. This in turn leads to the breakdown of collagen and leads to the formation of fine lines and wrinkles.  …

But Dr. Gross thinks it’s just a matter of time until dermatologists start considering the havoc water is wreaking on our skin. He wasn’t concerned much with water, either, until the skin woes of patients at his Manhattan practice led him to investigate further. “They would return from trips in the U.S. or abroad with irritated skin–even though they were using the exact same skincare regimen,” he said. Concluding that their skin issues resulted from the variation of city water, Dr. Gross began running lab tests on tap water nationwide. “I was shocked by the variation of heavy metal content from city to city,” he says.

In his research, Dr. Gross found that each metal pointed to a certain skin issue. He considers iron–with high amounts in Los Angeles, Park City, and New York–to be the most detrimental metal found in tap water because the accumulated deposits get energized by the sun, which has been linked to some cases of skin cancer. But for those individuals who are breakout prone, he says that calcium and magnesium are the two elements that will cause the most damage. “Both of these elements cause one’s own oils to become comedogenic and form waxy plugs that clog pores and lead to further breakouts, inflammation, flare-ups and irritation,” he said.

Some, after making this discovery, have quit tap water cold turkey–opting to cleanse with anhydrous (no water necessary) products or bottled water (so Paris Hilton). Washing with distilled water often leaves those unaccustomed with a “slippery” feeling, as the water instantly lathers and dismantles the soap scum later that lingers on skin.

But for those who can’t resist that refreshing rush of H20 pouring down on their faces in the shower each morning, they can opt for products that contain chelators, an organic complex that sequesters the heavy metals on the surface of the skin, preventing them from penetrating into the pores and causing damage. Dr. Dennis Gross Skincare’s Hydra-Pure Intense Moisture Cream is infused with Dr. Gross’s Chelating Complex, which he says “is likened to washing your face with pure H20.”

Personally I don’t think any of my skincare products have chelators in them, but I am going to try to be more vigilant about using toner (I have quite a few and forget to use them all the time) after cleansing in order to make sure that I have removed some of the mineral deposits left on my skin.  One day I would like to get a filter for our water, but in the meantime I’ll just have to get creative.

*I also need to add that my hair and scalp has been a complete disaster since I moved because of the hard water where I live.  I still haven’t figure out how to fix that issue.

One Response to “Hard Water and Your Skin”