Guess the Connection Between Dentists and Nail Products June 17, 2013 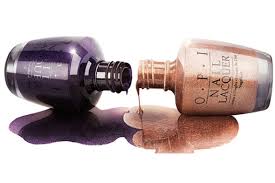 If you read my bio in the “about” section of this blog you’ll learn that since returning to live in Israel this past August I completed both a manicure/pedicure course and an artificial nails course.  In order to finish both courses of study and receive my certification from the Israeli The Ministry of Industry, Trade, and Labor I needed to write a very short research paper about a topic that related to the subject of the course.  Intrigued by some information that my teacher had shared with us at the beginning of our studies about who invented modern artificial nails (a dentist) I decided to try to research that subject more for my paper.  In the end I discovered that there really isn’t that much information out there about the origins of modern artificial/acrylic nails (all the sources I found just repeat the same information over and over) yet I did discover that there is a surprising connection between the dental industry and the nail industry.  Well a surprising connection in my opinion so I thought I would share the information here for my readers.

The Origins of Modern Artificial Nails

Throughout history and across all cultures women have been obsessed with their nails, lavishing attention and time to decorate, grow, and extend them.  The length of your nails could even speak to your status in society as was the case during the Ming Dynasty in China.  Modern, acrylic nails such as we know them today came from an unlikely source – a dentist by the name of Fred Slack.  Dr. Slack, a leader in prosthetic dentistry and a one of the original developers of the process for manufacturing plastic teeth, cut his thumb nail in 1957 while working in his laboratory.  Dr. Slack used aluminum foil to create a platform on which to fix his nail with dental acrylic.  Viola!  The world’s first acrylic nail.  Eventually this act would lead to the first nail form patent.  Though Dr. Slack remained in the dental industry his son realized the application of professional dental product and their chemistry in the nail industry (and he also recognized the great potential for growth in the nail industry) and shifted their company’s focus (the company is called NSI Nail Systems International)  in the 1970s from dental products to nail products.

Other Dentists and Dental Supply Companies and Their Nail Connections

But here is the intriguing thing, at least in my opinion, NSI Nail Systems International isn’t the only nail company that has its origins in the dental industry.  Both CND and OPI started off with connections to dental industry.

CND’s story is as follows (from the company’s website):

Who would have thought the nail care industry’s most innovative company would get its start with a chance discovery in a dentist’s office? That’s where Dr. Stuart Nordstrom, a practicing dentist, got the idea for a new nail enhancement product: A patient remarked that the material used to prepare temporary caps smelled like the material used to sculpt porcelain nails. The result was SolarNail™ Liquid, the industry’s first-ever monomer formulation for greater nail strength and flexibility—and the first product to deliver natural, non-yellowing nail color. SolarNail was a transformative event. It changed the future of the nail industry. It changed the future of the Nordstrom family.

And what about the nail polish power house OPI?

With funky color names like Melon of Troy and celebrity fans like Barbra Streisand, OPI nail lacquer is the Hollywood starlet of the manicure world. But 20 years ago, the company catered to a decidedly more mundane body part: the teeth. When CEO George Schaeffer bought the Los Angeles-based company in 1981, it was a dental supplier called Odontorium Products Inc. that sold dentures and lab equipment. A garment-business veteran, Schaeffer invested in the enterprise because he wanted stability, but he disliked the cutthroat nature of the business. What interested him was the steady stream of women who paid full price for dental acrylics used to make fake teeth.

Schaeffer soon realized those buyers were trailblazers in the burgeoning manicure industry. Products for fake nails weren’t available, so manicurists used his acrylics to create false tips. Then an inspector told him the substance was illegal for that use–a snag could rip the entire nail off. So Schaeffer hired a chemist to create a nail-friendly version. “Nobody made a product with the consistency of the illegal one,” he says. …

Using his wholesaling background, Schaeffer decided early on to stick to selling to professionals, not consumers. In 1985, he gleefully dumped his dental operation, simply abbreviating the brand name to OPI.

(From From Tooth to Nail Once a stodgy dental supplier, nail-polish giant OPI gave itself a radical makeover – CNN Money)

In summary: Remember – the next time you paint your nails or have artificial nails done you have a dentist (or a dental supply company) to thank for the experience.  Who would have thought? 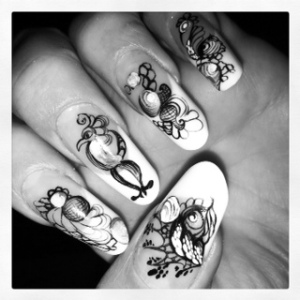 The other reason I started to like my class so much was that I was lucky enough to have a great teacher – Oshrat Chen. Oshrat’s skills in creating artificial nails were very apparent from the beginning and her nail art skills are amazing. All the photos in this post are examples of Oshrat’s work. Only today, three months into my course, did I find out that Oshrat has won Israeli nail art competitions and has placed in the top ten in international nail art competitions. So happily I get to learn from the best.

A few words about nail art: practice! It took me forever to learn how to apply nail polish correctly (and I still think I could improve), and I am still working on perfecting my french manicure technique. There are tons and tons and tons of nail art tutorials out there (I pin them like crazy on Pinterest), but you do not realize how much skill you really need in order to create these designs until you try to recreate them yourself. Don’t give up, keep trying. If I can do anyone can do it. Consider taking a class if you can with a skilled nail artist. Hands on learning with a master who can see (and correct) your work is priceless. And above all – have fun! Nail art, though an art form in my opinion, isn’t a strict discipline. Everyone can create something that they love and share it with the world via Instagram and Pinterest (to name just two out of many sources for nail art inspiration). Nail art can be 3D as well. Lastly, nail art isn’t limited to a few different designs. Let your imagination run wild. Designs can be anything from a new take on french manicure, to flowers, geometric designs, or like Oshrat’s designs here for artificial nails – designs that could easily be translated to canvas.

Oshrat was nice enough to share photos of two nail art tutorials with me so I could share them with my readers. If you give them a try be sure to let everyone know how they turned out for you. 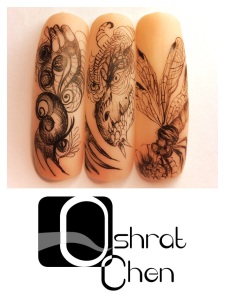