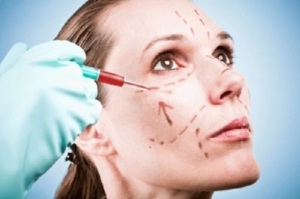 I recently read with great interest two articles about new in office anti-aging procedures.  The first article was in Harper’s Bazaar, and it was about a new nonsurgical browlift called Ultherapy.  The second article was in The New York Times Skin Deep series about a new trend in facelifts called the “vampire facelift”.    Neither of these procedures are surgical or invasive.  The so-called vampire facelift falls under the category of “liquid facelifts” which is a facial rejuvenation procedure that normally means fillers and Botox are used to create a temporary change in the appearance of one’s face without surgery.   Ultherapy uses ultrasound technology and heat to lift the brows and rejuvenate one’s appearance.

[this procedure] entails having blood drawn from your arm, then spun in a centrifuge to separate out the platelets. They are then injected into your face, with the hope of stimulating new collagen production. Selphyl, as the system is called, arrived on the booming facial-rejuvenation market in 2009, and is now used by roughly 300 doctors nationwide in the name of beauty, said Sanjay Batra, the chief executive of Aesthetic Factors, which manufactures the Selphyl system.

Why would someone choose to pursue this procedure as opposed to having Botox and fillers injected into their face?

Ghoulish as the procedure sounds, some patients prefer the idea of using their own blood rather than a neurotoxin or synthetic filler to rejuvenate their faces. “We all want to look better,” said Joan Sarlo, 56, who underwent a Selphyl “vamp-lift” performed by Dr. Lisa A. Zdinak, a Manhattan-based doctor whose specialty is ophthalmic plastic surgery. But the “less unnatural the better,” Ms. Sarlo said. “What could be better than your own blood?”

Some doctors say that fillers taken from one’s body are less likely to cause irregularities and bumps in thin-skinned areas than synthetic ones like Sculptra Aesthetic. But at this point, it’s hard to tell whether “platelet-rich fibrin matrix,” or P.R.F.M. (the medical term for the golden-hued platelets that Selphyl extracts), is an effective filler for hollowed-out cheeks and wrinkles.

But for me the crux of any cosmetic procedure comes down to safety and proof that the procedure is safe through FDA approval as opposed to testimonials and heresy.  And here is where things get messy, excuse the pun, with the vampire facelift:

What’s more, doctors and consumers aren’t clear on where Selphyl stands with the F.D.A. In a YouTube video featuring Dr. John Argerson, a board-certified family medicine doctor who works out of Refine MediSpa in Johnson City, Tenn., tells consumers that Selphyl is a “newly F.D.A.-approved filler” for nose-to-lip folds. And in a December 2009 article in Dermatology Times, a trade publication, Dr. Ranella Hirsch, a board-certified dermatologist, said Selphyl is “a new F.D.A. approved dermal filler.” This week, Dr. Hirsch, who doesn’t use Selphyl in her practice, said that she couldn’t explain why she misspoke, adding in an e-mail that “the lack of clarity between F.D.A. approval versus F.D.A. clearance to market is a key point.”

Indeed. The F.D.A. has not approved or cleared P.R.F.M. derived in a Selphyl centrifuge to be marketed for facial rejuvenation. In 2002, the agency cleared a blood-collection system called Fibrinet, whose platelet-rich byproducts orthopedic doctors then used to speed tissue repair. In 2009, this same machine was born again as Selphyl, and since then, the company promoted it as a way to “reverse the natural aging process.” This week, Shelly Burgess, an F.D.A. spokeswoman, said that Selphyl’s maker would have to file an amendment to get clearance to market its blood collection system in a new way, and no such amendment could be found at this writing.

Asked whether Aesthetic Factors’ marketing of Selphyl for cosmetic rejuvenation violated any F.D.A. policy, Ms. Burgess simply wrote, “As a regulatory agency we would not discuss whether a firm’s claims violate our regulations.”

In light of the fact that there is little to no clinical data that this procedure works as claimed, and furthermore since the FDA has neither cleared nor approved this procedure I would steer clear of doing it until there is such approval.  There are so many safe options for liquid facelifts that there is really no need to try something that is still in trial stages.  Who knows?  Maybe 15 years from now a vampire facelift will be the norm but until then I would suggest that you proceed with caution.

Ultherapy is very different from the vampire facelift described above.  This procedure uses ultrasound heat on your forehead in order to greatly increase collagen production beneath the skin’s surface.  As collagen production increases in that area of your face your brow firms.  Immediately after getting the treatment you will see a smoothing effect, and as your collagen production increases over time your results will improve in the months to come.  And what might be the best news of all, these results are pretty much permanent though some patients may need a touch up in a year.  Ultherapy costs somewhere between $1,000 to $4,000 and has been cleared by the FDA for use on the forehead (according to the Harper’s Bazaar article).  If the machine is used incorrectly a burn could result because of the intense heat generated by the machine.  That heat can also make the procedure less than comfortable.

According to an article in the April, 2011 issue of Vogue (which I can’t find online unfortunately) Ultherapy can be used on both the face and the neck not just the forehead.  The article explains how Ultherapy works thusly:

Thermal energy bypasses the upper layers of the skin (those conventionally targeted by Fraxel and Thermage), safely heating the underlying connective tissue that lines the facial muscles.  That tissue contracts, resulting in an immediate tighting and, ultimately, a tangible lift.  …  In an attempt to target multiple layers of tissue, doctors then set the device to a shallower depth and make a second pass with the hand piece, this time intentionally aiming its heat at the skin’s upper layers in order to stimulate line-smoothing collagen production.

Furthermore, according to the Vogue article it takes about an hour to complete both the neck and the face using ultrasonic imaging so the doctor performing the procedure can view each layer of the muscle and skin as they work on the patient.  Risks include some swelling and bruising and a feeling of tightness for a few days following the procedure.  And one more thing, the procedure doesn’t feel so great.  It can feel like a hot prickling sensation to intense and short bursts of pain.

Overall as an option for slowing down the aging process Ultherapy sounds promising.  You can try it out if you feel that your face needs a lift but you aren’t ready for a facelift yet.

One more note – it turns out both of these procedures have been featured on The Rachael Ray Show , How to Look 10 Years Younger,  which has made me wonder – do I need to start watching The Rachael Ray Show in order to keep up with cosmetic procedure trends?  I always thought her show was all about cooking. 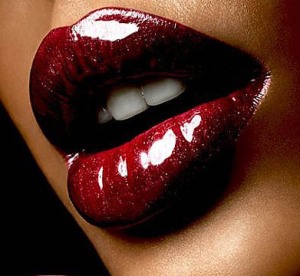 I just read an article in the September 2010 issue of W about estheticians who massage their client’s muscles inside their upper lip, cheek, and jaw in order to promote blood circulation, relaxation, oxygenation to the skin cells, and encourage movement in the neck, head, and jaw.  All this results, according to the claims, in a tighter, smoother complexion and better absorption of skincare products.  The technique is known as Buccaling and is borrowed from Rolfing the body alignment method.

Though this sounds intriguing I have to admit that before I came across this article I had never heard of this technique anywhere – not in the professional literature that I read or from other estheticians or clients.  Does this work as it says it will?  I can’t answer that question at the moment.

But this idea dovetails into another issue I read about.  This time I read an article in Harper’s Bazaar about the real way to look younger – get a dental face-lift.  As we age our teeth wear down and our jaw recedes resulting in a more hollow look to your face.  So in order to fill in those collapsing areas individually sculpted veneers are applied to upper and lower teeth which lifts the cheeks, plumps the lips, and helps bring volume back to the face.  It turns out this is a subtle change that can have a big effect on your appearance in the end, and since veneers can last 15 years or more the results are relatively long lasting.

Once again I can’t comment on this procedure, but it is interesting and frankly makes a lot of sense to me.  I guess now there is more than one good reason to see a good dentist (and develop a good relationship with them).  Who knows?  Maybe the fountain of youth really does exist and it lies in our mouths.